IT TAKES A CERTAIN KIND OF MAN TO DON A KILT. DARING. ORIGINAL. SELF-ASSURED.

It takes a similar kind of man to make a kilt for himself at the age of 17, draping himself in the rebellious spirit  that would come to define a company, a brand and a culture. That visionary man is James Ansite, Sport Kilt’s founder and CEO. In 1995, James already  had the cool points that came with being a competitive bike racer in Long Beach, California.  All he needed to take it up a notch was the perfect garment to match his daring personality.

IT WAS OFF TO THE FAMILY’S GARAGE, WORKING WITH HIS FATHER JIM.

It was off to the family’s garage, working with his father Jim Ansite,​ ​​to fashion a cutting  board out of a ping pong table and using grandma’s sewing machine to thread what would  become the Original Sport Kilt. The tartan was James’ own design, and as he began to wear  it to races he couldn’t help but turn heads. Here was something wholly original and  unbelievably practical, as James would demonstrate by dropping his bike shorts and airing  out post-race.

The kilt caught on. James began making them for his friends (“now I see why girls wear  skirts!” they would remark), and national cycling publications took note of the growing trend.  Highland Games athletes, rich with Scottish heritage, saw these new kilts as a wearable  alternative to their expensive, wool kilts best suited for formal events. The burliest of  athletes were now expressing their bravery – and ancestry – as they competed. JAMES IS ONE OF THE MILLIONS OF AMERICANS WITH A LINEAGE THAT TRACES BACK TO SCOTLAND AND  IRELAND.

As the calls starting coming in for specific clan tartans – Ross, Smith, Kelly, etc. – it  was clear that Sport Kilt represented a deep pride for the homeland. James’ kilts became a  must-have item for any clan.

BORN IN SCOTLAND, MADE IN THE USA

What started out as one kilt has grown into not only the first, but the most successful,  casual kilt making company in America. The bottom line, as James puts it, is that everyone  wants to talk to the guy in the kilt. He’s gutsy, he’s non-traditional, and he’s bold enough to  put one in his closet. Just like the guy who made the first one for himself over 20 years ago. Sport Kilt offers a wide range of Universal Tartans & Clan Tartans. Shop Sport Kilt by tartan to outfit the whole clan with the clan tartan, or find a matching fit for your clan’s newest member. Complete your Sport Kilt ensemble with fashionable and stylish Kilt Accessories. From Sporrans to Sashes, Flashes to Pins and much more. 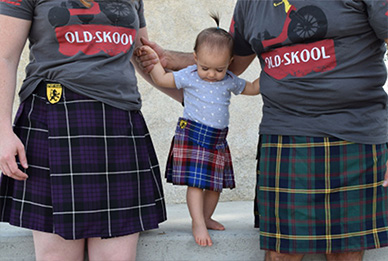 Sport Kilt makes cute kilts for kids, Get your whole family in on the fun! All Kids Kilts from Sport Kilt are designed to be gentle on children’s sensitive skin, but durable to last through the games they play.